User rating:
All an official info
Download:
ps4remoteplay.net is not an official representative or the developer of this application. Copyrighted materials belong to their respective owners
Get App

PS4 Remote Play review: No Farewell to Arms, but a Moveable Feast

PS4 Remote Play is the feature that enables remote access to your games on PS4, so you can play them from whatever device you’re connected with. The performance of your client device almost doesn’t matter, as PS4 does all the processing. So you can enjoy your games wherever you are and whatever device you’re using, and here are some tricks on this.
How great it is to sit at your large 4K TV, with Dualshock in your hands, playing some stunning action game on your PS4! That’s the way it’s supposed to be; but if you happen to be somewhere away, or your TV is occupied by your family watching some show you’re the only one not fond of… Well, there’s still a way.
The Remote Play feature integrated in PS4 allows it to work as a game server, running games, receiving your controller commands, and broadcasting the picture to your remote device, no matter if it’s a computer or something mobile. Let’s see how this feature works.

Getting your PS4 ready

First of all, no matter what device you’re going to use, you’ll need to activate this feature on your console. That’s how it’s done:

Now your system is ready. As you activate it via your account, it will turn on and load, without the need to do it manually. So make sure it’s always powered and connected to the Internet.

There will be some limitations. Say, you won’t be able to get 4K content via Remote Play, it’s limited by 1080p. But on most mobile devices or PC’s you’ll be good with this. There are also games that don’t support it. Then it’s up to the developers to activate the feature in updates; there’s no way to get over this.

Why play at your PC?

There are some reasons you may need to prefer remote mode on your PC to direct playing. Let’s list some of them.
Your TV is occupied by your family watching something that’s on right now. If you don’t want to join, you’ll be fine away playing.
You need to record some gameplay video or make screenshots directly to your PC. There are other ways, but this one has its pros.
You’re away from home, but you want to enjoy your favorite games. Luckily, the feature works over the Internet as well as in local networks. 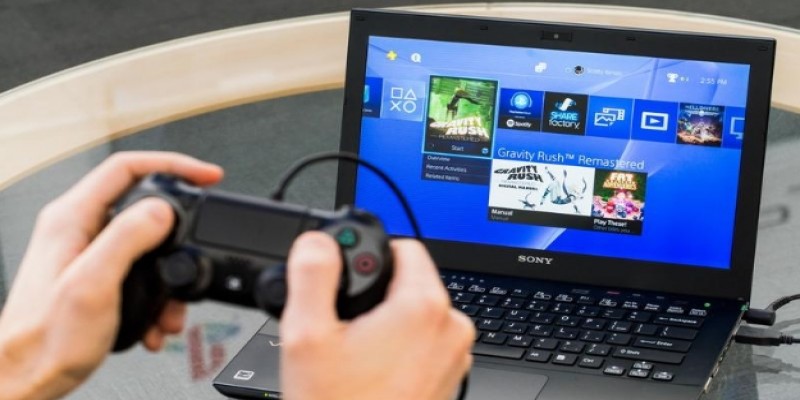 You’ll still need your Dualshock gamepad, but it’s easier to carry than the whole console with a screen good enough. So, connect it to your PC and launch the application. It will connect to your PS4 as soon as it loads, and in Settings you can adjust video resolution, frame rate, and text input method. To activate the connected gamepad, press the Options button on it, as the instruction says.
Then you’ll see the familiar interface and can start using your control remotely the way you do it regularly.

While today’s mobile devices boast high performance and high screen resolution, you can play your PS4 games with them as well. It’s easier for Android users, because Sony offers the official Remote Play app right on the Play Market. Those with no Google Services installed may need to download PS4 Remote Play APK file and install it manually, with the same effect. You get direct access to your PS4 library and can select any game to play.

The performance of your phone or tablet doesn’t matter (unless it’s very miserable), because most of the work is done by PS4 hardware. With PS4 Remote Play Android device is only responsible for video, you’ll have to provide stable connection.

Android devices can handle virtually any wireless gamepad, including the official Dualshock. But you can as well use virtual controls on the screen, imitating Dualshock layout. Sony says you can get the best experience with Xperia smartphones, but, in fact, one can do some tricks on rooted phones by other vendors to activate it.

To use PS4 Remote Play on iPhone, iPad, or even iPod Touch, you just need its official app. Oops! – it can’t be found in App Store. So, you’ll need a third party solution, named R-Play - Remote Play for PS4. It’s the only paid one in this PS4 Remote Play review, as the official release lingers (or so we hope it once appears).

The second problem is that you will have to purchase the MFi-certified gamepad to enjoy physical controls. Jailbreak can help with connecting the original Dualshock you must already own, and you can find the instructions on that, but it takes too much mayhem (and still no guarantee). So maybe purchasing some MFi device that’s usually quite affordable is worth it.

PS4 Remote Play can turn useful at any moment, so it’s great to have it on your PS4. Look around: maybe you already have all the hardware you need, like a cable to connect the console to your router, or an extra gamepad to use remotely. If not, think of purchasing them: it may cost you even less than repurchasing the games for PC or mobile devices (if these versions exist at all).
The experience is generally smooth and dynamic, as remote playing features the same frame rate and no delay compared to playing right on your PS4. But your connection needs to be at least 5 MBPS to guarantee that.

This links follow to webpage, where you will find links to official sources of PS4 Remote Play. If you are Windows PC, Mac or Sony user, then just click to button below and go to the page with links. Please note that this app may ask for additional in-app purchases and permissions when installed.

Get App
Download Free Review of PS4 Remote Play.
Download it
PS4 Tournament Party
Order Now
Latest Posts
By continuing to use this site, you agree to our use of cookies, which we use to improve our content, analyze site performance and to deliver personalised content. Click here to learn more.
Accept